Some people are not paying SkyTV after the first contract. The dish is there belong to Sky. However we can use it to receive OptusD1 the Freeview NZ satellite channels. We can not achieve this via Sky receiver box. The comment type available on market is “DishTV”, I do not think it’s better than my Star Track FTA regular box. The price for a DishTV box could be from $139 to a few HUNDREDS!

In this case the customer is using a SkyTV antenna with a 4-output Sharp LNB. The box only receives a vertical transponder channel from Australia. All channels including Freeview on H transponders are not receivable.

I checked directly from the dish, from different outputs, all with a Vertical signal but no horizontal signal. This happened before, I found it is because that the SkyTV standard dish is so heavy, much heavier than most of regular Ku band dishes, while the supporting beam mount is much more to the back than regular ones, the LNB is heavy too. Over years, the gravity did the work, the dish had been dropping down gradually until the elevation is not accurate enough for horizontal signal. I aligned the dish back to correct position and tested signal again. It turned out that not only position moved, the LNB itself is not functioning well either, so we decided to switch to a regular universal LNB, then the problem came with the LNB holder bracket, like this: 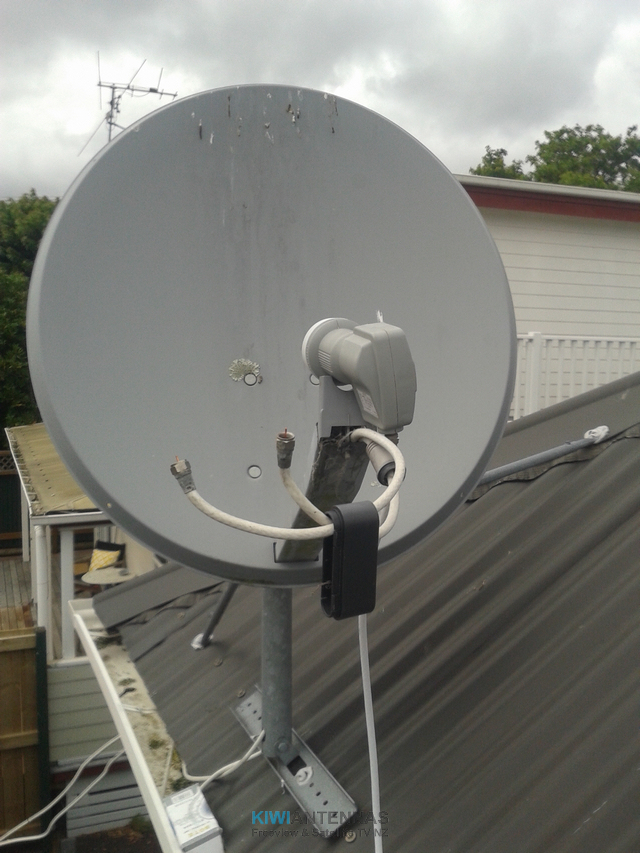 The bracket size is not correct. The whole plastic piece has to be replaced. The regular holder is small in base so it is inserted into the square metal beam.

After this it’s not all done yet, with a auto search or manual search, we can find all the freeview channels, you will notice that some channels the signal is still not idea. The reason is that the “DishTV???box has a frequency memory storing the not so accurate transponder frequencies. A factory default reset and auto search again won’t necessarily fix it. The box has to be completely power disconnected hard rebooted! This is quite wired but the trick works, I have tried it a few times.

In the next post you will find the totally hard rebooting even applies a DTV ready TV, especially for TV3 glitchy problems.