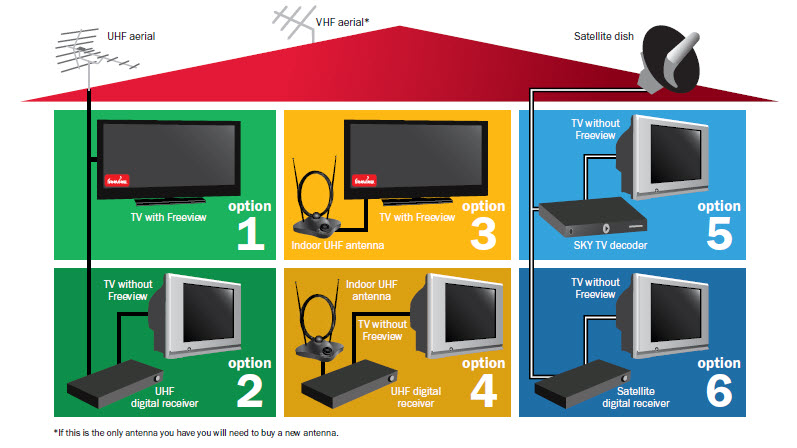 The Warehouse did a great job explaining different options and solutions of going digital for Freeview in New Zealand, no one can make it better for general public, even better than Freeview itself.

Option 1 & 2 are the most common choices of Aucklanders. While option 5 & 6 are for those area without Freeview aerial signal.

Option 3 & 4 are not recommended. To get stable and good signal of Freeview, an indoor antenna is normally not effective.

Anyway, it is better explained here: 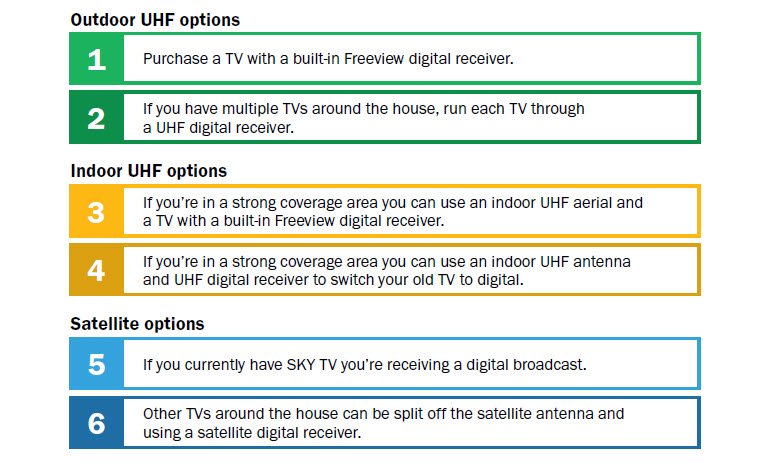 In terms of when should we do it, refer the to national timeline. For Auckland, the deadline is Sunday, 1 December 2013. 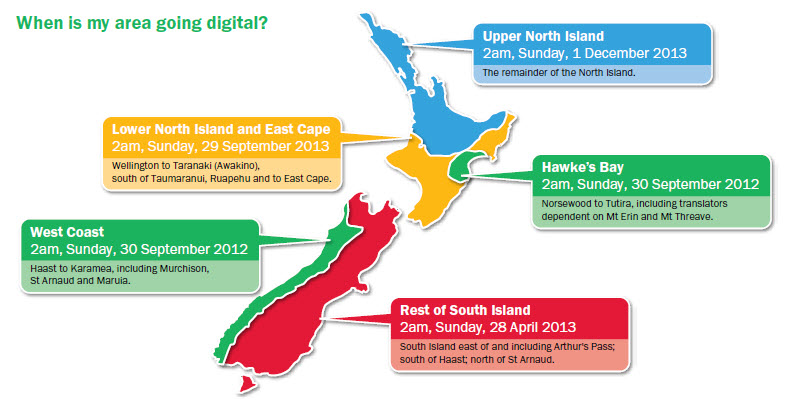 Going Digital is not as difficult as you might think of it. However, you might need some new equipment.

Here are a few steps to help you find out what you’ll need. Remember, you don’t need a new TV! Even New Zealand’s oldest telly has gone digital. You might not be very sure of what are you watching now, for example traditional TV? Freeview? SKY TV? Or you don’t have a TV at all? if so the chances are you’ve got a traditional analogue TV.

“Going Digital” means we have to give up the old type big analog aerial, all Freeview channels and some more one channels will be transfered to you either by a new type of UHF Aerial, or by satellite. If you’re looking to get Freeview|HD via UHF aerial and you have already checked to ensure you have Freeview HD coverage at your place, here’s the equipment you’ll need.

Option2
If you have a UHF aerial and want Freeview|HD, beside a correctly set up UHF aerial, you need a Freeview|HD receiver and connect it to your existing analogue TV.

Option3
If you have a UHF aerial and want MyFreeview HD, beside UHF aerial, you need a MyFreeview HD recorder to be connected to your existing analogue TV or TV with Freeview|HD built-in.

Also to make sure you’re getting true HD you’ll need the following:

You’ll still get a crystal clear digital quality picture in standard definition without the two things mentioned, as long as you have a UHF aerial and a Freeview receiver.

If you do not have a UHF aerial but after you check the map, you think you can get some UHF signal, I suggest you to contact us for a more technical test on site. Freeview HD is surly the first priority, it’s free anyway so why don’t we get it a easier way and in HD?

Freeview channels via satellite dish is only a second choice if you are not so luck to be in the signal coverage region.

Freeview|HD (via UHF aerial)
Freeview is broadcast to your UHF aerial through the airwaves. The aerial sends the digital information to your Freeview receiver or TV with Freeview|HD built in, which decodes it to show on screen.

If you have Freeview|HD coverage as well as an HD-ready TV or plan to get one in the future this is the best way to get Freeview because you can watch selected programmes in HD (high definition), which is at twice the resolution of a standard image.

Freeview Satellite (via satellite dish)
Freeview is beamed to your dish from a satellite. The dish then sends the digital information to your Freeview satellite receiver, which decodes the information to show on your TV screen.

For some regions (without UHF signal), Freeview Satellite might be the only option ( too bad, you do get HD) , but you still get more channels than you would on analogue TV, clearer pictures and sound than the before, plus an 8-day on screen guide.